German Pioneers on the Canadian Prairie 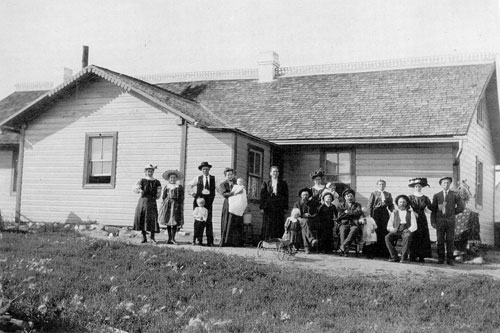 A couple of years ago, I became interested in learning about my ancestry. I was aware that my heritage consisted of English, Irish and a bit of Scottish was suspected in the mix. Some snowy winter weekends spent on the laptop led me down a unexpected path to German ancestry as well.

When I was a girl, my grandmother told me that her grandmother had worn a little white bonnet and I vaguely recall the mention of her being Mennonite. It’s funny how such a detail as that can lay dormant in your mind for so many years and miraculously spring back to life when you are older.

I followed records four generations back to my great great grandmother and discovered her photo online. There indeed was the bonnet my grandmother had told me about. Her maiden name, Williams, is British, so I continued to search for the German Mennonite thread and found it in the previous three generations: Buchner, Ritenour, Schular and Claus. Throughout the 1800’s, these families came to settle in Ontario. They arrived from Germany, Manitoba, and the USA.

One of the fun things about being a writer, is dreaming up your character’s backstory. So, with my newly discovered ancestry, I set about to build a family tree based on the history of German immigrants to Canada. My readings about the Great West Migration fueled my imaginings.

In the late 1800s, the Canada’s west — the future prairie provinces — became interested in attracting settlers. It wasn’t until a firm demand for hard wheat was established,  that settling the west became an attractive option for potential immigrants.

The zealous and forward thinking Minister of the Interior, Sir Clifford Sifton, developed an aggressive campaign to attract agricultural settlers to the prairies. He sent a network of agents to England and the US to advertise the benefits of beginning life anew on the Canadian prairie. Between 1896 and 1911, his campaign brought over two million immigrants to Canada.

Eastern European countries were also targeted by his campaign. When Canadians bawked, Sifton replied, “A stalwart peasant in a sheepskin coat, born on the soil, whose forefathers have been farmers for ten generations, and a stout wife and a half-dozen children is good quality”.

Loyal to his pursuit, but conscious of the racist sentiments, Sifton pursued ethnicities according to a hierarchy of desirability. From most to least desirable, the “British and American agriculturalists were followed by French, Belgians, Dutch, Scandinavians, Swiss, Finns, Russians, Austro-Hungarians, Germans, Ukrainians and Poles.” (Harold Troper, “Immigration”)

A 1908 brochure told Germans about opportunities available for a poor man willing to work. Wanted, it read: 14 000 men for railroad construction with high wages promised; 100 000 men to farm, each promised 160 acres. Advertisements showed fields of golden wheat, promoting the notion that the West offered a land of plenty to anyone who was willing to take the chance. Agents used promotion lines like, “Canada is the new America“.

Many of the earliest prairie settlers haled from German colonies in Eastern Europe. In the late 1800’s, these colonies were experiencing a population boom that created high unemployment. Restrictions were placed on land acquisition as land was in short supply. At the same time, Canada was recruiting settlers with the offer of free or cheap land and an abundance of labourer jobs.

When Frank Oliver succeeded Clifton Sifton as minister of the interior, he described the German pioneer as “a man of dominant race, of untiring energy, of great foresight … of sterling honesty and reliability”.

Delving deeper into this bit of Canadian and German history has me thinking about the possibilities for my novel character’s family tree. What traits of this pioneering ancestry will carry forward to influence the behaviours, beliefs, and personality of himself or his parents? I’m picturing his great grandparents standing on a wharf in Bremen, Germany, breathing in the cool salt air of the ocean and wandering what lies ahead. Now, I’m ready to write.

Have you discovered something fascinating in your ancestry?  Or perhaps a fact related the Great West Migration?

7 thoughts on “German Pioneers on the Canadian Prairie”